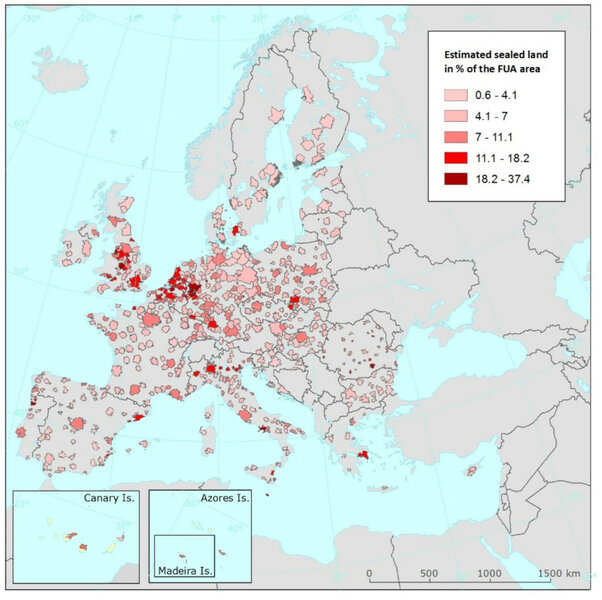 Estimated sealed land in % of the total area in Functional Urban Areas in 2018. (Source: Figure 2 of report)

space4environment co-authored a paper that was published recently in the journal "Land" as part of the "Special Issue Land Degradation and Sustainable Land Management". The paper provides recent findings on the impact of soil sealing on the carbon sequestration and water storage potentials as well as biomass productivity of soils in European urban areas. By integrating European-wide data sets from the Copernicus Land Monitoring Service as well the European Commission's Joint Research Centre's European Soil Data Centre, the study revealed that one-fifth of the area of soil that became sealed between 2012 and 2018 was of high productivity potential, and almost two-thirds was of medium productivity potential. New soil sealing caused a loss of carbon sequestration potential estimated at 4 million tons of carbon of the urban areas and also caused an estimated potential loss of water-holding capacity of 668 million m³.

The abstract of the paper is available here, the full paper here.